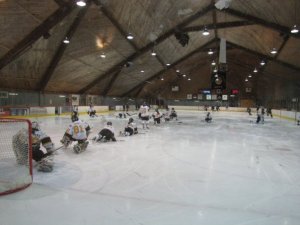 In a year, there will be no ice surface at Dalhousie University.

The University announced yesterday that the Dalhousie Memorial Arena would be demolished in 2012, leaving a gaping hole on the campus.

The decision was made after a Board of Governor’s voted yesterday to approve the plan.

The arena is not just home both Varsity Hockey teams, it is home to 42 Intramural Hockey teams this Winter and countless other community groups and programs, including the Dalhousie Tigers Superskills Hockey Camps.
That’s not to mention that it is the venue that host’s the Annual Residence Charity Face-off each March, an event that has raised an average of $20,000 a year and is played in front of a packed house.

In an article by Halifax Metro, it was estimated that it would cost $3-4 million to fix the current roof and that there were not plans to currently build a new arena, but it may be looked at in the longer term.

A direct quote from Charles Crosby, the University Spokesman said that ““The plan is for it to include things like physio, a cardio area, yoga studios and the like.”

A move like this will no doubt cast doubt upon the future of both Varsity Programs at Dalhousie, with the cancellation of Saint Mary’s Women’s Hockey program last Summer still very fresh on the minds of University Hockey fans across the city.

The saga of the Jonathan Drouin tale in Halifax continues.

The second overall pick behind Nathan MacKinnon in this year’s QMJHL draft has been the subject of speculation and rumours since it was announced he would not be reporting to the Halifax Mooseheads training camp, choosing instead to stay in Quebec and play midget AAA for Lac-St. Louis.

Since that day, rumours of trading the player all the way to stories about a holdout for money have been thrown around in blogs and fan forums, while both the family and the Mooseheads have stayed quiet for the most part. That is, until Drouin visited the Mooseheads this past week and set off a frenzy of fan speculation, many hoping the highly touted forward would be an answer to recent injury problems and make a surprise midseason jump to the Herd.

To further to fuel, the following picture has surfaced with a clearly labelled “#27 Drouin” stick nestled in-between Konrad Abeltshauser and Travis Randell and taken prior to the November 25th game verse the Cape Breton Screaming Eagles: 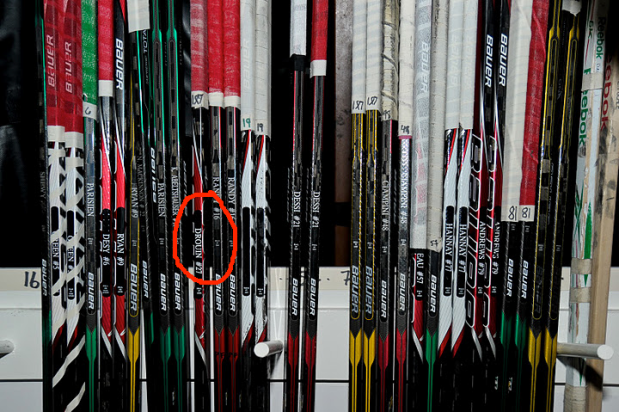 Appearing on a photo stream from a Halifax Mooseheads photographer*, is it a sign that Drouin is on his way?

As the old saying goes, a picture is worth a thousand words, how much can be taken from this photograph?

Although it is clear that there is also a Parisien stick present, the over-age forward at least attended training camp, while Drouin never even showed up.

With speculation already rife in Moose Country, this picture will surely excite a fan base of a team that is enjoying great success early on this season.

*Photo Credit goes to David Chan, he’s been taking pictures for about 5 years for the Mooseheads.

Desjardins may help fill the void left by injuries

With the biggest concussion story in hockey coming to an abrupt end Monday night, the injury depleted Mooseheads are still battling a few concussion problems of their own.

On their recent  trip to Quebec, the Mooseheads picked up four out of six possible points in just three nights, however, many are wondering whether or not the high number of injuries will slow down the Moose.

An injury depleted Herd face a tough weekend ahead, playing three games in four days and will have to do it without a number of key players in the lineup.

Both Martin Frk and Anthony Terenzio are at least a few weeks away from a chance back in the lineup, while Steve Gillard, Trey Lewis and Darcy Ashley have been experiencing ‘concussion like’ symptoms.

Ashley, the teams second in scoring, leaves fans hoping the return of Andrew Ryan will help fill the void. Ryan returned last after missing 22 games with a broken Ankle and picked up his first goal and assist of the season.

After hosting the Cape Breton Screaming Eagles on Thursday, they play Lower Sackville native Ben Duffy and the PEI Rockets the next night, before scurrying off to Moncton for a 4pm puck drop on Sunday.

All three teams are behind them in the rankings, with the PEI Rockets currently sitting at the bottom of the QMJHL with just six wins this season.

Fucale has carried a heavy workload so far in Halifax.

After digging deep to beat Drummondville Friday, the Moose were rolled over Saturday against the Remparts, losing 6-1 in a game that saw the Quebec team dominate from start to finish.

Sunday the Mooseheads responded with a big effort, scrapping together a 2-1 win over the Rimouski, a game that saw Andrew Ryan score his first goal of the season after breaking his ankle in training camp.

The Mooseheads had five different scorers over the weekend, with Ryan making an instant impact in his return to the lineup. The second-year forward, a former 19th overall pick in the QMJHL draft, was a -1 over the weekend.

Nathan MacKinnon failed to hit the back of the net all weekend, but chipped in three assists and now trails Mikhail Grigorenko by six points in the Rookie scoring race and sits 13th overall in the Q.

Zachary Fucale started all three games, but was pulled for the final 12-minutes against the Remparts. Fucale stopped 84 shots over the weekend, picking up his 10th win over the season over Rimouski on Sunday.

The Halifax Mooseheads sit 6th in the QMJHL and hold a 15-7-1-1 record, but have played the least amount of games of all QMJHL teams with just 24. Their next game is Thursday night, when they host provincial rival Cape Breton Screaming Eagles.

Three touchdown’s by Dave Clarke set the tone for the Hurricanes, pounding the running game up the middle with the Tigers unable to shutdown the run game.

Demetrius Ferguson ran a kick-off back and Jeff Hillier scored on a brilliant 60-yard reception on a pass from standout quarterback Nick Hunsley.

The Tigers lone touchdown came from Greg Pelly, who also had a touchdown called back early in the game on an offensive holding call.

In the other semi-final matchup, the UNB Red Bombers squeaked out a come from behind 23-22 win over the defending Champion UNB Saint John Sea Wolves. The Red Bombers won when Evan McAulay slipped in his own endzone, causing his team to concede a single point on the final play of the game.

The Hurricanes will face the UNB Red Bombers on Saturday at 1pm on MacAdam Field, with home field advantage going to Holland College.

In their final Atlantic Football League regular season game, the Dalhousie Football Club fell behind early to the Saint John Sea Wolves and were unable to claw their way back into the game.

Two touchdowns by running-back Justin Cavan within the first two minutes of the game gave the Sea Wolves the early advantage and the defending AFL Champions refused to let go of the lead, winning 43-29 at the Canada Games Field.

The loss leaves last years runner-up Tigers with a 1-5 record heading into the playoffs, allowing 154 points and scoring just 102 over the six game season.

League leading Holland College Hurricanes (5-1) will host the Dalhousie Tigers (1-5) in the first semi-final matchup and the UNB Fredericton Red Bombers (3-3) will host the UNB Saint John Sea Wolves (3-3) in the other matchup. Both games are hosted this Saturday, with kick off in Charlottetown at 1pm and a 2pm kick-off in Fredericton.

Holland College heads into the playoffs favourites after leading the league points for with 179 and allowing just 111 points against, a stingy defence that has allowed their offence to take over games.

A blog covering the Beautiful Game and the Brutal game.

Covering the issues from the grass to the ice, this blog is all about Soccer and Hockey - big news, big drama and lots of gossip.